In my previous post, I talked about Dora Kallmus a forgotten pioneer in the world of early photography. In the late nineteenth, early twentieth century Dora broke all the rules in composition and subject matter. Her vibrant, often risqué poses earned her celebrity status, and she soon became the toast of Vienna and much of Europe.

Yet who has heard of Dora Kallmus?

Today I will be continuing her amazing story.

Dora’s studio in Vienna, Atelier d’Ora, was an instant success and helped her to secure her position as The Photographer of a new millennium. Her daring poses and unusual subjects, such as exotic dancers and revealing self portraits, gained her a reputation for taking risks. Exactly what her famous clients craved.

But Dora was ambitious and wanted to attract a wider clientele. So in 1925 she and her assistant Arthur Benda opened a studio in Paris. Although it was a success, Benda preferred his life in Vienna and returned, taking over her studio and renaming it d’Ora-Benda-Wien. His actions caused a rift between them and they never spoke again.

Loosing her technical assistant did not deter Dora and she carried on with her fashion photography and portraits of stars in theatre and the silver screen. But things were about to change for Madame d’Ora. Firstly, when the National Socialists gained power in Germany in 1933. Unfortunately for Dora, the fashion industry collapsed and magazines that featured her photographs were reprimanded for doing so and she was no longer able to show her work in this way.

Second was the German invasion of France in 1940. Dora, despite converting to Christianity, was still a Jew and was forced to sell her Parisian studio. For much of the second world war, Dora went into hiding in such places as a cloister in La Lanvese, southern France and even on a farm. Finally relocating to Austria in 1945. Although Dora survived the rest of her family were not so fortunate and were killed in the holocaust.

The tragedy of the war weighed heavily upon Dora. Her photography changed drastically and she began to turn her talents to photographing the horrors of the aftermath of survivors from concentration camps.

She began a series of documentary photographs capturing the misery of refugees fleeing to Austria. Dora continued to take fashion photographs, but her interests seemed to switch from glamorous photo shoots to dark representations of the horrors of the casualties of war and oppression.

Her disturbing series of images from 1950-58 when she was now in her seventies, captures the gruesome and terrifying plight of animals sent to slaughter. She vividly captures the brutality of the slaughterhouses in Paris and in doing so the inhumanity of her fellow man. Perhaps a reflection of what she saw in the concentration camps a decade earlier.

Please visit my Pinterest site to view Dora’s photographs taken in the Parisian abbatoir. I chose not to put them here as some people may find the images too distressing.

When Dora was knocked down by a motorcycle in 1959 she returned to her family home in Frohnleiten Austria, that had been sold under the Nazi rule but then returned to her.Her injuries form the accident meant that she lost most of her memories and could no longer take photographs. She died October 28 1963 at the age of seventy-six.

Dora Kallmus’s legacy lives on in her outstanding photographic works of art. She was a pioneer in the field of photography and should be remembered for her daring and unique style that brought her fame, fortune, and a passion for pushing the boundaries of the photographic image that influenced many future practitioners in the art.

Thank you for reading my post. If you would like to know more about my work please visit my:

Let there be light. Why? Because without it nearly all life on this planet would cease to exist. It heats, illuminates, nourishes and gives life. It also inspires works of art. As a writer, I can use light in many forms, natural, supernatural and artificial to enhance my narrative. As a photographer, well, I wouldn’t be able to take photographs without it.

In this series about light, I will be dealing with the many forms it takes. From the glowing backsides of fireflies to the many ways human beings have found to illuminate the darkness.

Nature is amazing. We humans are, for the most part, in awe of it and have been ever since we crawled out of the primal ooze. Nothing stirs the soul quite so much as a beautiful sunset, a sunrise, a mass of twinkling stars, or the constant glow of the moon.

The sun gives us light and warmth, stars make us wonder about far off worlds, the moon illuminates our darkness with its wide-eyed face looking down on us like a distant mother watching her children. No wonder creative minds have used light as inspiration.

Many writers have used light to express happiness, love, hope, expectation and joy. Just listen to some songs, the word ‘light’ comes up quite often. ‘Light my fire‘ The Doors. ‘You lIght up My Life’ Debbie Boone. ‘Ray of Light’ Madonna. ‘Shadows and Light‘ Joni Mitchel, to name but a few. The same is true of literature: ‘Northern Lights‘ PhillipPullman. ‘The Light that Failed’ Rudjard Kipling. ‘Where the Light Last and other stories‘ Agatha Christie.

In my short story Glimmer, the protagonist, a young man resisting the drugs he is given to keep him ‘sane’, retreats into his own world and listens  for the voices that come from the stars.

“The world will not end because I close my eyes. The sun will still shine, so too the stars. Yet the darkness behind my drooped lids tells me otherwise. I see a macrocosm made up of swirling silhouettes and geometric shapes that aren’t strange to me at all. This is where I live now, in x-ray blackness. There is peace in this non-colour.”

Watch out for Part two in the series: Religion and Light.

For more information about my work please visit my website:

I have been working on my second short story collection for over a year now. I was going to publish it last Christmas, but like I said in my previous post, I got cold feet.

I have now finished it and will be publishing it on November 5th – Bonfire Night in the UK. May as well start with a bang!

Anyway, here is the blurb and cover. Would you buy this book?

Inspired by artists such as Chagall, Munch, and Banksy, these curious, darkly humorous and sometimes surreal stories explore human nature in all its disparate colours. From finding love against the odds on Blackpool Beach to surviving abandonment on a dying planet, each tale takes you to another time and place where reality is blurred and dreams mingle with the paint mist from a spray can.

If you like authors such as Philip K Dick, Edgar Allen Poe, Ray Bradbury, Annie Proulx and Franz Kafka, then Crow Bones is the anthology for you.

I will also be launching my new venture – Oddly Books  where I will be publishing my own weird novels and stories as well as getting together other like-minded authors to produce quality fiction that strays beyond the edge of reality.

So, if you are an author who writes quality, speculative, strange stories, please do get in touch.

“The hiss and babble of a pot brewing up bones and gristle gave the kitchen a sense of bustle despite the stillness of the sole occupant.

Alice, fixed to her seat, did not waft her flushed cheeks, scratch the itch that made her thigh twitch or wipe off the sticky fluid on her fingers. She just sat, stared at the pan and let the blood drip.”

My first short story anthology – Glimmer and other stories – the ebook is on offer at the moment for only $0.99 £0.99. You can purchase it on Amazon: 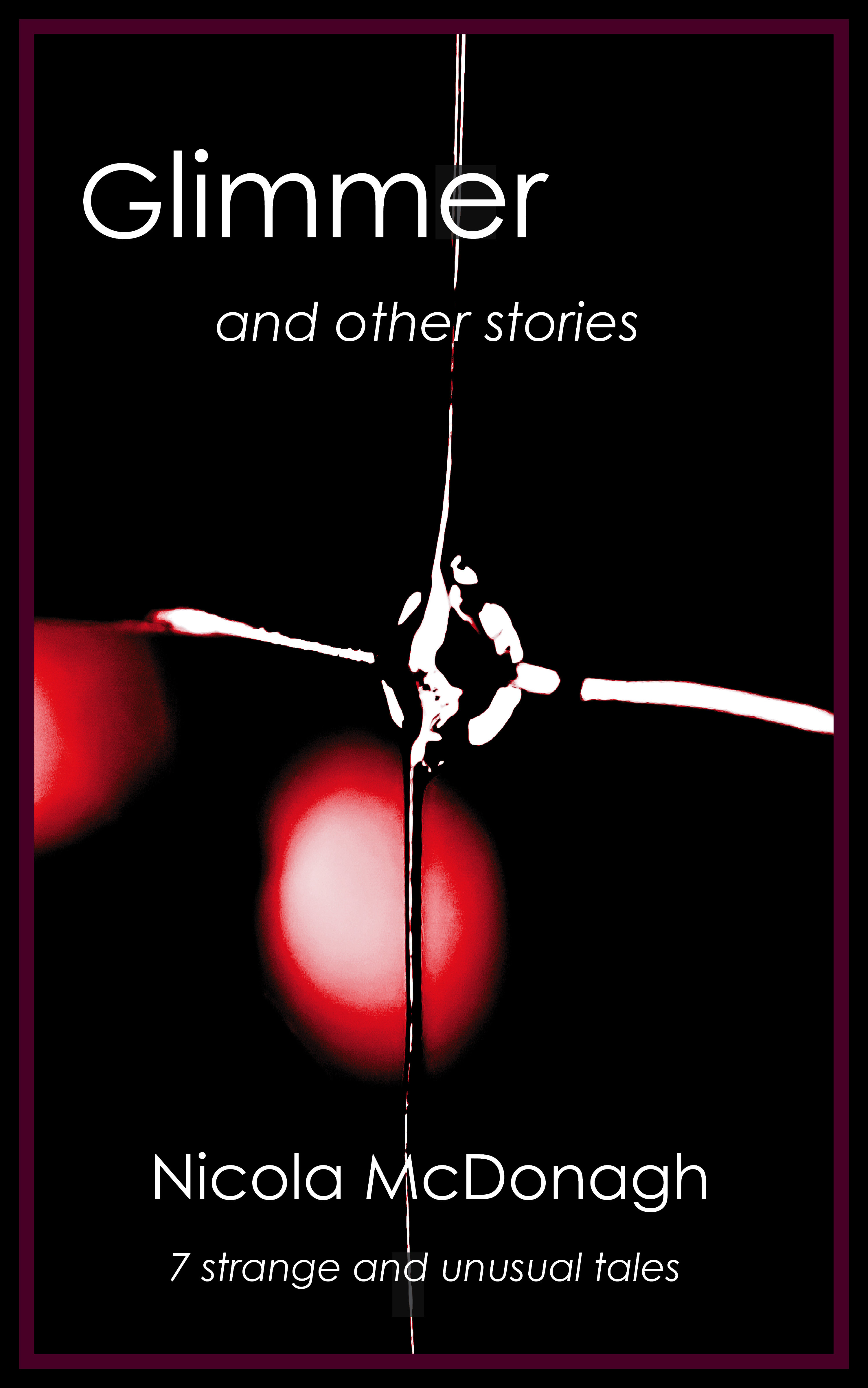 UK:  https://www.amazon.co.uk/Glimmer-other-stories-Unusual-suspense-ebook/dp/B00H89AN1M
Or from a variety of sites such as Kobo, itunes and Barnes and Noble. Just click on the link below:
https://books2read.com/u/4AgOLA
Any author interested in the Oddly Book anthology, please do get in touch. My email is: nikki@nicolamcdonagh.com. Or leave a comment with a contact for me to get in touch with you.
Thanks for reading!!

Since it is National Black Cat Day, I thought that I would re-blog this post relating the story of a plucky feral cat we named Boris. He has overcome so much and is now a loving and talkative feline that loves to play and be cuddled.

About a year ago a black feral tomcat came into our garden and decided to stay. He would come and go and catch the rats that plagued us. So, to thank him we began to give him some food. Winter came along and he shivered in the cold. We built him a kennel and he kept as warm as he could. Gradually over the months he became quite friendly and allowed us to pet him. One day he didn’t turn up. Not that unusual, especially in the warmer months, he would go off for a few days at a time, return famished and sleep for a while before going away again. This time he was missing for a week. Then we saw him squatting by the place we fed him. He stood and limped over to us. He had been in a terrible accident. His back legs were badly injured, one was very swollen and his tail had been stripped of all its fur.

He was thin and clearly in a lot of pain. We nursed him as best we could and gradually he recovered. During the course of his recovery, he became the most loving and affectionate cat I have ever known. Now, Boris, as we called him, is our shadow and follows us everywhere when we go outside. He is so adorable and very talkative. He loves to be cuddled and plays with various toys our other cats have long forgotten about. He will never be able to join us indoors, because we have several other felines that would object strongly, but he is welcome to be our outside cat and we will continue to make sure he is warm and well fed. To celebrate his return to health, I decided to do some slow synch flash photographs of Boris at play, and write some Haikus to go along with the pictures. I have fiddled with the photographs to try and make them look more like paintings or pastel art works.

From out of the blue

Whiskers and claws, swipe at the

Cat, both fall and tumble in

Red. A slash of hue amidst

For one brief moment and then

Shrugging off the shoulder ghost

Half in the picture

Happy National Black Cat Day to Boris and all the other black cats in the world!!