Dora Kallmus. She was extremely influential in changing the way people posed for their picture. Dora’s unique style helped to popularise the celebrity portrait, and her fashion photography broke all the rules. Yet, History has chosen to forget her.

If you would like to know more about my books, please visit my website: www.oddlybooks.com
To view some of my photography go to:
http://www.nicolamcdonagh.com/

I haven’t written a blog post for quite a while. So I thought I’d start again with my recent review of a collection of unorthodox short stories from a writer with a dark and creative imagination. I highly recommend this book to anyone who enjoys reading stories that are different and weird.

You can grab your copy here:

The Orthography of Madness and Misgivings by Michaël Wertenberg is a collection of short stories largely about the human condition when in a heightened state. Most of the tales are gruesome and troubling with some marvellous flashes of magic realism that keep you thinking about them long after you have read them. There are lovely vivid descriptions that make you shudder our laugh. I particularly enjoyed the stories in diary form of the author’s experiences living in different countries. Worth a read if you prefer literary fiction to pulp. There are a few inconsistencies in the narrative that need to be addressed, but nothing that detracts from the overall enjoyment of his work. 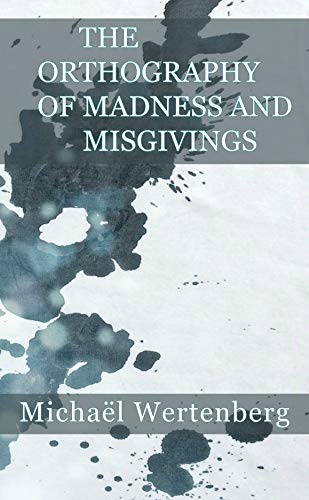 If you would like to see what I’m currently working on please go to my website and click on ‘Work in Progress‘. It’s an Historical Crime Thriller set in Vienna 1899, working title – Black Vienna.